Letter to the Minister

It's been too long since my last post in "Tasmania-bound."

Since I've been back on my home island, I haven't felt quite the same compulsion I had to write about my grand adventure, since I'm home, comfortable, and experiencing what geographer Edward Relph calls "existential insideness." Plus I'm not homesick for the Island and my people, which is always a driver for my writing. I'm still unabashedly Tasmania-bound – but at this moment it's "to" rather than "for." I will resume my blog posts shortly – once the transcribing is under control and I'm actually writing the thesis. More on that in another post, I promise!

But sometimes you just need to vent. And I thought that this might be the place for it.

As you probably know, I was the publisher of Charlottetown's Acorn Press for 17 years, until I sold it to Terrilee Bulger in 2010 so I could go to Tasmania to do my PhD. (My friend Ann Thurlow tells me there aren't many people who can say that!) Terrilee's been doing a great job of keeping the books coming – still focusing on Prince Edward Island manuscripts while doing a few other off-Island titles that are just too good to pass up.
However, we learned earlier this year that the provincial government has cut the publisher support program yet again, making Prince Edward Island the only province to not offer funding support. Last week's Guardian published Richard Lemm's Opinion Piece, calling for the program to be reinstated. The week before that, Island writer Steven Mayoff was interviewed on CBC about how he sent a signed copy of Acorn's latest fiction anthology, Riptides (featuring 23 new short stories by some of the Island's finest writers) to the Minister of Culture – and encouraging other authors to do the same. And Terrilee has launched a contest to win a copy of Riptides if you send your own letter of support to the Minister. 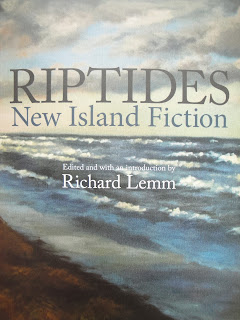 Since I already have my copy, AND my letter is too long to meet her guidelines of 3-500 words –  here's mine here. It went to the Minister and Premier August 3, and I've yet to receive a response – or even an acknowledgement that it's been received.

If you feel inclined to write a letter, please do so! And if you have any comments on what's written below, please send them along.
**

As the founding and former publisher of Charlottetown’s Acorn Press, I am writing to protest once again the decision to cut the Book Publisher Support Program. It saddens me to know that the success of last year’s lobbying efforts was so short-lived.

I join the voices of other Island writers, illustrators, publishers, and supporters of the arts to implore you to reconsider your decision – especially in light of the very real threat that the Island will lose its only publishing company if the program is not reinstated. After all, why should the new owner of Acorn, Terrilee Bulger, keep the Press here if there are no incentives to do so, when she could simply move the Press to Nova Scotia and receive a grant to help support her publishing activity there? It is an irrefutable fact that should this happen, there will be substantially fewer Island books being published.

Incidentally, the longstanding publisher support program in Nova Scotia offers between $170,000 and $190,000 to its member publishers, which, based on a population of 921,727 people, amounts to between 18 and 20 cents per capita. If your government was to reinstate the $10,000 grant, based on 141,000 people, that's 7 cents per capita. That is a shocking comparison, but this amount will still make the difference between whether the Press stays on the Island or is lost to the mainland.

It would break my heart if Ms. Bulger were to take the Press – which I started from scratch in 1993 – off the Island because of a mere $10,000 a year. It would be a disservice to all the writers and visual artists whose distinctive Island voices would be silenced. And it would be a travesty – and bitter irony – to be recognized once again as the only province in the country to not support its publishing industry, especially since so much of our multimillion-dollar tourism industry is based on a book.

Premier Ghiz and Harry Holman are no doubt familiar with the history of our lobbying efforts from my letter of March 2011. But, Mr, Henderson, I would like to ensure that you know the story, too.

For several years, I, as publisher of Acorn Press, had lobbied the provincial government for a publishing support program. As I reiterated time and time again, Prince Edward Island was the only province in the country NOT to have one. For years, provincial governments across the country have recognized the importance of book publishers in maintaining distinctive cultures and as cultural industries that bring money into the economy.

While Poet Laureate, Frank Ledwell came along with me to meet with two Cultural Affairs ministers on two occasions: first Elmer MacFadyen, then Carolyn Bertram. The meeting with Minister MacFadyen in 2005 was just after Acorn learned that it had been unsuccessful in receiving anticipated Block Grant funding from the Canada Council for the Arts due to comments by the jury that Acorn’s books were too “folksy” and “of uneven literary contribution.” A letter-writing campaign to the Council ensued, arguing the point that publishing distinct regional voices is essential to the cultural mosaic of Canada, and needs to be respected by those at the centre. (I’ve since been told that the Council had never seen such a flurry of letters from outraged writers, publishers, and other Atlantic Canadians – including the PEI Department of Community and Cultural Affairs; Acorn’s file is very, very thick.) Staff at the Council eventually conceded our points, and Acorn went on to receive funding the following year – but, in the meantime, thanks to Minister MacFadyen, the province stepped forward with a $15,000 emergency grant to fill the funding gap for 2005. The understanding was, though, that this was a one-time grant and was not to be thought of as a publishing support program. I was told that the government could not create a program for just one publisher.

The second meeting, with Carolyn Bertram, occurred a few years later, in spring 2008 - one of the last things I did with Frank before he died. Again, Frank and I presented our case for a Prince Edward Island publishing support program. Previously, Joseph Sherman and others had worked with the department to create the Prince Edward Island Book Awards; the first award was given in 2006 to an Acorn book (Catherine Edward’s The Brow of Dawn). Much to the department’s surprise, the first book awards attracted over 30 entries, and not all from Acorn Press. I remember Harry Holman telling me how amazed they were to discover so much publishing activity in the province – much of it self-publishing efforts, but demonstrating strongly that there was more than one publisher on the Island.

As a result of the success of the Book Awards, and, I like to think, our lobbying efforts, in 2008 Minister Bertram announced The Book Publisher Support Program granting up to $10,000 per publisher. (If memory serves, the program’s total amount was approximately $30,000.) The eligibility criteria for the program were quite broad, allowing self-publishing enterprises to apply. Ironically, after being told that the government couldn’t create a program just for Acorn, the first year Acorn received $7,500 instead of the maximum $10,000 because the pot had to be divided up between all the publishers! I think I said something to Harry about the irony, and in 2009 the guidelines were tightened, so fewer publishers were eligible, and Acorn received the full $10,000.

In 2010 I anticipated that the call for applications would happen as usual at the end of June. It did not. I heard reasons such as budget restraint and that old argument that they couldn’t have a program for just one publisher. However, as of 2009, another trade publisher had entered the mix: Larry Resnitzky's Retromedia. David Weale’s Tangle Lane Publishing was publishing books. Island Studies Press was publishing books. (I do know that Harry Holman objected to Island Studies Press qualifying, even though they do NOT receive money from the University of Prince Edward Island to support the publishing program.) As per the eligibility rules, the Confederation Centre Art Gallery and Museum or the PEI Museum and Heritage Foundation never received funding from the program. I’m not sure who else qualified.

And even if there WAS just one publisher, why NOT have a program? Especially when there is such a huge amount of literary activity on the Island that benefits the Island in so many ways, such as promoting our distinctiveness as an island province, and ensuring that our voices are heard – especially because we are an equal partner in the Canadian federation and take great pride in being the smallest.  And perhaps a program would encourage others to start publishing.

I would like to reiterate here why a distinctly Island press is so important. Often, big-name authors get their start in small, regional presses like Acorn. They otherwise would not be noticed in the hundreds of manuscripts that are submitted each year. I have often told authors that if they can get their books published off-Island, they should – since mainland presses have more resources to promote and market their books. But then they’ve come back and told me that they’d rather publish locally because Acorn offered excellence in editing and design – and personal attention - that the big presses didn’t. It is thus important that a local press is given the resources to publish these manuscripts.

Because of our small market and economies of scale, it is difficult to ensure that every book breaks even. Some you don’t expect to break even, anyway – they’re published for other reasons, such as the contribution they make to the Island’s cultural understanding. Those books in particular need government backing.

As publishing heads into the world of online and print-on-demand publishing, it’s important to remember that more resources go into publishing book than mere paper, print and bind costs. There is the cost of manuscript development, editing, design, and marketing – and the most basic of these is quality control: self-published books are not peer-reviewed (they’re called “vanity” publications for a reason), and are often poorly edited and designed. Professional book publishers are always striving to improve the quality of their books in order for them to compete in the marketplace.

If the reason for cutting the program is "belt-tightening,” why is it that culture always loses out when huge amounts of money are given to other causes that are deemed more worthy? What could be more worthy than ensuring that our culture remains a living, breathing one?

I said it in my letter to the Canada Council in 2005, and I’ll say it to the provincial government now: it is crucial that Island publishers be supported in order that they produce books by and for Prince Edward Islanders. For too long, we’ve had to listen to others’ perceptions and vision of what Prince Edward Island is and/or should be. If we aren’t in charge of telling our own stories, then we have no one to blame but ourselves if someone else comes in and does it for us – and gets it wrong.

I urge your government to once again reinstate the Book Publisher Support Program. It is too important not to.

Posted by Tasmania-bound at 9:39 AM 5 comments: